Holopelagic gelatinous zooplankton are a group of animals with a bit of a PR problem. First, as you might already notice, those are some pretty obscure words. Second, these creatures are distributed through vast depths of the ocean, rarely witnessed and barely studied. But if there were a PandaCam livestream for the zooplankton, I would be binge-watching.

For some background, I’m referring to marine animals that spend their entire life cycle drifting in the open ocean (not attached to a surface), have delicate bodies with no hard parts, and are typically less than half an inch in size. They can live thousands of meters deep in the ocean, so might be the polar opposite of the fuzzy, charismatic pandas we all know and love. But they serve crucial ecological roles, and do in fact look absolutely mesmerizing.

I have been studying the holopelagic gelatinous zooplankton called Tomopteris, or gossamer worms, as a research intern at the Smithsonian National Museum of Natural History in Washington, DC. My project involves describing two newly discovered species, which grants me the awesome privilege of choosing their names. The first I’ll name Tomopteris spacellicauda, which is Latin for its spaghetti-like tail, and the second Tomopteris laviventris for its bright red, lava-like belly. 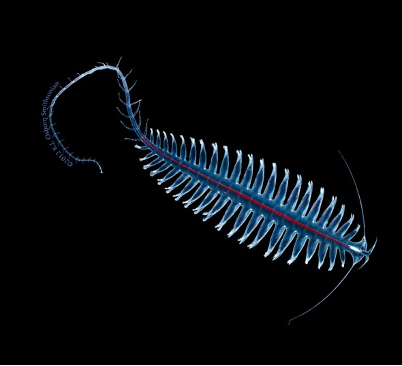 In researching these worms, I’ve grown to recognize that, although this group of organisms is not featured in museum exhibits, public media, or conservation efforts, they are directly linked to global climate. To start, they inhabit the volume of water that starts at scuba-diving depths and extends to the deepest seafloor, called the midwater, which represents the largest habitat on Earth: more than 90% of the biosphere!

The challenges to understanding what lives in the midwater are immense: it includes the most remote, highly pressurized, and darkest (save for flashes of bioluminescence) places on the planet. With advances in deep-sea vehicles, sampling and observation technologies, researchers are quickly realizing that these depths are rich with biodiversity and complex food webs, completely unlike any other habitat.

As deep midwater organisms drift across ocean depths, they eat and poop. As simple as this might sound, the collective eating/pooping of midwater organisms leads to a massive movement of nutrients, including carbon, from the surface of the ocean to its depths. If you’re someone who spills green tea, you might think of carbon in terms of carbon dioxide, a major greenhouse contributing to warming of Earth’s atmosphere. But, just as water moves from rivers to oceans, to clouds, rain, drinking water and into our cells, carbon has a complex path of its own, also known as a “biogeochemical cycle”.

Carbon dioxide from the atmosphere mixes into the surface of the ocean and is consumed by photosynthetic microbes, which are then eaten by larger organisms, transferring that same carbon up the food chain. Deep midwater organisms, like Tomopteris eventually consume and carry this carbon into ocean depths. To put it simply, through this pathway, carbon is stored in deep water in the form of an animal, instead of the atmosphere in the form of a gas. Knowing this, we can appreciate that if this pathway were disrupted, far more carbon dioxide would enter Earth’s atmosphere and intensify climate change.

You may start to hear more about the deep sea in the coming decades, as it is currently being explored for mining activity around the world. Mining operations would wreak havoc on deep-sea ecology, but could also source rare-earth minerals important for green energy technologies, like lithium-ion batteries. As this ethical dilemma grows, I wish for the general public to explore the wonders of deep sea biology the best we can. Whether it’s a google image or youtube search, we can all take a break to enjoy the pulsating rainbow combs of the Ctenophores, the conveyor belt of jelly called a siphonophore, or the glowing green “bombs” cast from Swima worms. Pandas might need to step up their game.

idk what to really do with it, but it looks nice